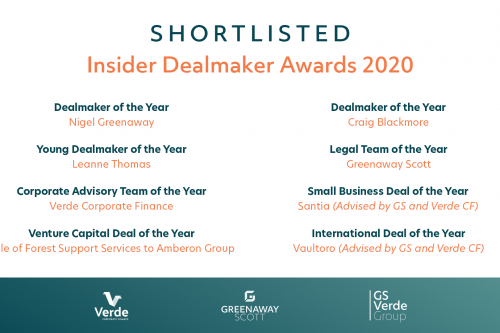 The GS Verde Group, an integrated professional services group which specialises in mergers and acquisitions (M&A) and advice to scale-up companies, has received a total of 10 shortlisted nominations, across 7 different categories, at the prestigious Wales Dealmaker Awards 2020. The number of shortlisted entries is the highest number of any organisation in Wales and reflects the successful year experienced by the Group.

Nigel Greenaway, CEO of the GS Verde Group said, "I am delighted that the Group continues to be recognised for its M&A advisory work. The Group is in its 7th year of trading and set out to shake up the establishment and the old boys network that has traditionally dominated in Wales. It is testament to the strides taken by our Group that we were the most active dealmakers in 2019 and in half year 2020 (based on the data released by Experian) and now our shortlisting's at the Dealmakers are a fair reflection of that activity level."

Craig Blackmore, Director of Verde Corporate Finance added, "We have experienced incredible growth at Verde this year and have needed to successfully pivot the support we have provided for clients during the pandemic. The Group structure has enabled us to provide financial and legal support that has led to the completion of a number of highly complex transactions and fundraising over the past year. Now more than ever, the importance of a strong team ethic and cohesive approach has been essential, and the Group performance, together with this recognition, is testament to that."

The Wales Dealmakers Awards 2020 provide an opportunity to celebrate the top acquisitions, buyouts and funding deals in the year to June 2020, and the people that made them happen. The Awards are due to be held on the 11th of November at City Hall in Cardiff. 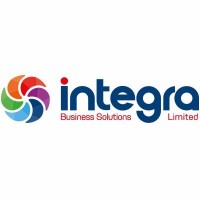